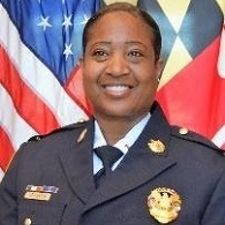 Rachel Jefferson began her Law Enforcement career with the Metropolitan Police Department D.C in 2005.  In 2008 she transferred to the City of Bowie Police Department.  2009 Jefferson was promoted to the rank of Corporal, 2012 she was then promoted to the rank of Sergeant; to satisfy the growing need to become more operationally sound, Jefferson was selected to hold the position of Administrative Sergeant.  She also, was involved in the Body Worn Camera testing and deployment project for all uniformed officers.  In 2018 Jefferson was promoted to the rank of Lieutenant, becoming the first female in the history of the agency to promote to a Command rank.  In 2020 Jefferson was able to lead the agency to successfully complete the initial assessment for CALEA Accreditation. Also, in 2020 Jefferson began working to develop and establish the Department’s Unmanned Aircraft Vehicle UAV program. Jefferson holds a Master’s Degree in Human Services and a Bachelor’s of Science in Psychology.