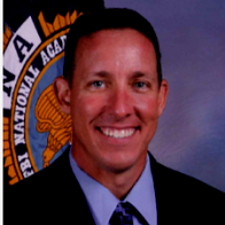 David Hofmann was appointed to the position of Chief of Police for the City of Lawrence Police Department on January 1, 2016 by Mayor Steve Collier. Prior to that, he served with the Indianapolis Police Department since 1997, after serving three years as a patrol officer for the City of Muncie, Indiana.  He began his career with IPD as a patrol officer on the North and South Districts and has held a supervisory rank since 2005.

Hofmann had served the citizens of Indianapolis, with IPD/IMPD, in a variety of assignments, including the Operations Division, Professional Standards, the Field Training Unit, Bicycle Patrol, the Neighborhood Resource Officer Unit, as a certified public safety SCUBA instructor for the Underwater Search and Recovery (Dive) team, the F.O.P. liaison to the Citizens Police Complaint Board, and as an investigator for the Internal Affairs Unit. He is a patrol-rifle trained officer and was assigned to the IMPD Southeast District as the district’s Executive Officer until January, 2014, when he was appointed to the position of Commander of IMPD's 83-square mile Southwest District, home to more than 160 officers who protected 140,000 residents.

Hofmann is a 1992 graduate of Indiana University in Bloomington, holds a Graduate Certificate from the University of Virginia, and is currently pursuing a Master of Science degree in Criminal Justice and Public Safety at IUPUI’s School of Public and Environmental Affairs. He is a graduate of the 250th session of the FBI National Academy in Quantico, Virginia, and the IMPD Leadership Academy session 2010-01. Hofmann is a member of the International Association of Chiefs of Police (IACP) and has presented at national conferences for IACP and other professional associations.

A 25-year resident of the City of Lawrence or Lawrence Township, Hofmann is excited to see the positive things occurring in Lawrence. He notices the family atmosphere in public safety and the progressive, innovative initiatives occurring in Lawrence Government, including the current construction of the first-ever dedicated police headquarters building / 911 dispatch center, the implementation of a highly innovative, technology-based body-worn camera program, and the creation of a Community Engagement Office within the department.