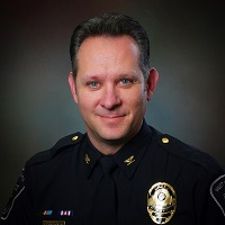 Chief Jason Dombkowski retired in January 2019 after 25 years of service with the West Lafayette (IN) Police Department. He served as the city’s Chief of Police from 2008 – 2019. He is currently the Director of Law Enforcement Relations for BodyWorn by Utility, Inc.

Under Jason’s leadership, the WLPD was the first law enforcement agency to deploy police body-worn cameras in Indiana beginning in 2012. He is a U.S. Dept. of Justice Body-Worn Camera Subject Matter Expert.

Jason is the Immediate Past President of the Indiana Association of Chiefs of Police. Representing the IACP, he worked with state legislators to enact law establishing state standards for retention, redaction and public release of law enforcement body-worn camera and in-car camera video.